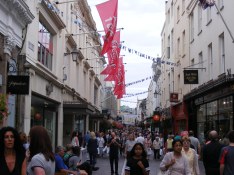 So many foreign tongues in one street you would think I was at an international event in a major city. Mostly I heard a variety of European languages, Spanish, German, French, and a few I did not recognize. I heard English spoken in an array of dialects hailing from Scotland, Wales, and England. Throw in a little Asian and you get the picture.  The street was a melting pot of cultures.

Where on earth was I? Was I having a weird dream? Had I eaten too much pizza? Was I at an international festival? No, no, no and no. None of the above. So where was I?

I was in the seaport town of St. Helier on the island of Jersey in the English Channel. Yes, incase you are wondering New Jersey USA is named after this 9×5 mile island.

The island sits nearer to Normandy than it does to the southern coast of England. I’m sure France would love to own Jersey but the inhabitants are loyal to the throne of Great Britain.

I wandered the busy street window shopping as I went. Expensive handmade chocolates bade me to come take a closer look, but look is all I did. Cute clothes and handbags decorated display windows. Souvenir stores with all things Jersey (think smiling cows) sat dotted among the more lavish boutiques. Coffee shops and tea rooms welcomed the thirsty visitor in from the warm September sun.

I kept on walking until I reached Liberation Square.  A monument celebrating the island’s fiftieth anniversary of liberation from German occupation during World War ll stands proudly for all to see. For five years the people were held captive on their own island, trapped by the enemy, unable to live their lives freely.

In the nearby harbor yachts and small boats sat in the mud, stuck, going nowhere. All they could do was wait for the tide to turn liberating them from the mud that held them down and setting them free to sail the seas once again.

What if the people of Jersey had chosen to continue living under war time occupation rules and restrictions after they had been liberated. We would think they were crazy. We would be shouting “Hey there, you have been liberated. You don’t have to live like captives anymore.”

Sometimes I live my life as a captive.  What about you? Negative thoughts and comparisons make their way into my mind and negative words spill out of my mouth declaring to the world the craziness that goes on inside me. Before I know it my actions soon follow the negative path.

Then I read His truth and am reminded that it was for my freedom Jesus died and rose again.

“Christ has set us free to live a free life. So take your stand! Never let anyone put a harness of slavery on you.” Galatians 5:1 Message Bible

With a grateful heart I accept His truth and my enemy runs away defeated.

Read God’s truth and you will find it written in the pages of your bible. Receive it for yourself. Stand on His Word and be a slave to the lies of the enemy no more.

Free to sail on the sea of truth.

Leave a comment: What lies are the enemy telling you now or have told you in the past? How were you set free? I look forward to reading how the light of God’s truth has, is, and continues to set you free.